A look at the faces of the many visitors was enough to see that the whole world was present, and Asia well-represented. Mindray, the Chinese leader based in Shenzhen, had one of the largest stands, while Siemens, the French champion, was not even present, probably due to the lack of doctors among the attendees. What is striking to newcomers in the field is the fragmentation of the products offered in all fields, from simple biopsy needles to pressure sensors, including the complete operating room or "turnkey" hospital.

4K and HDR UHD for endoscopy

Video-guided surgery continues to grow by leaps and bounds, with four fields of interest: Flexible endoscopy (through natural channels), rigid endoscopy for coelioscopy (such as abdominal surgery), arthroscopy, and microscopy. The first three fields were well-represented with their main leaders at their imposing stands: Olympus (Japan), Karl Storz (Germany) et Stryker (U.S.). 4K video was heavily touted, but upon closer inspection, it is quickly running up against several limits, the least obvious of which appears to us to be optical-related, in a very small optical field, and lighting-related, as the light cannot be increased without an effect on the temperature of the body being lit. Transfer limits associated with bitrate and latency are also present. 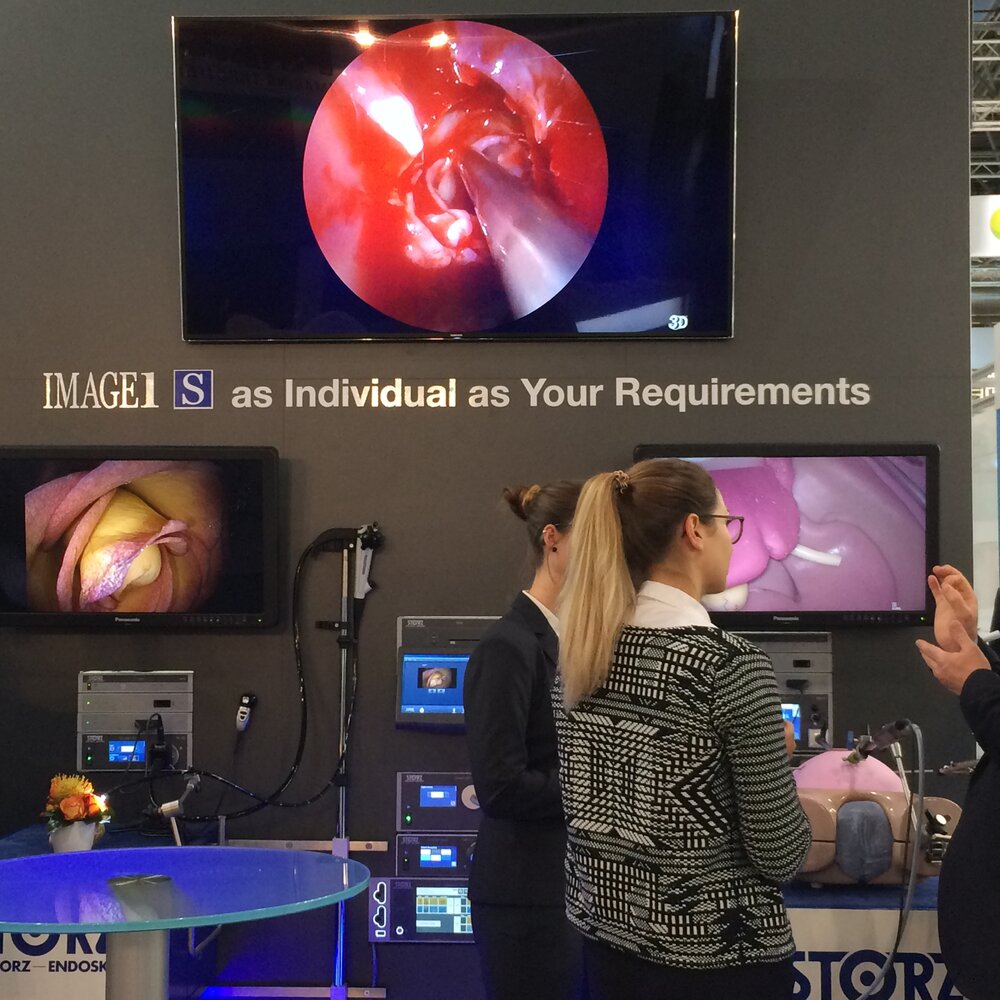 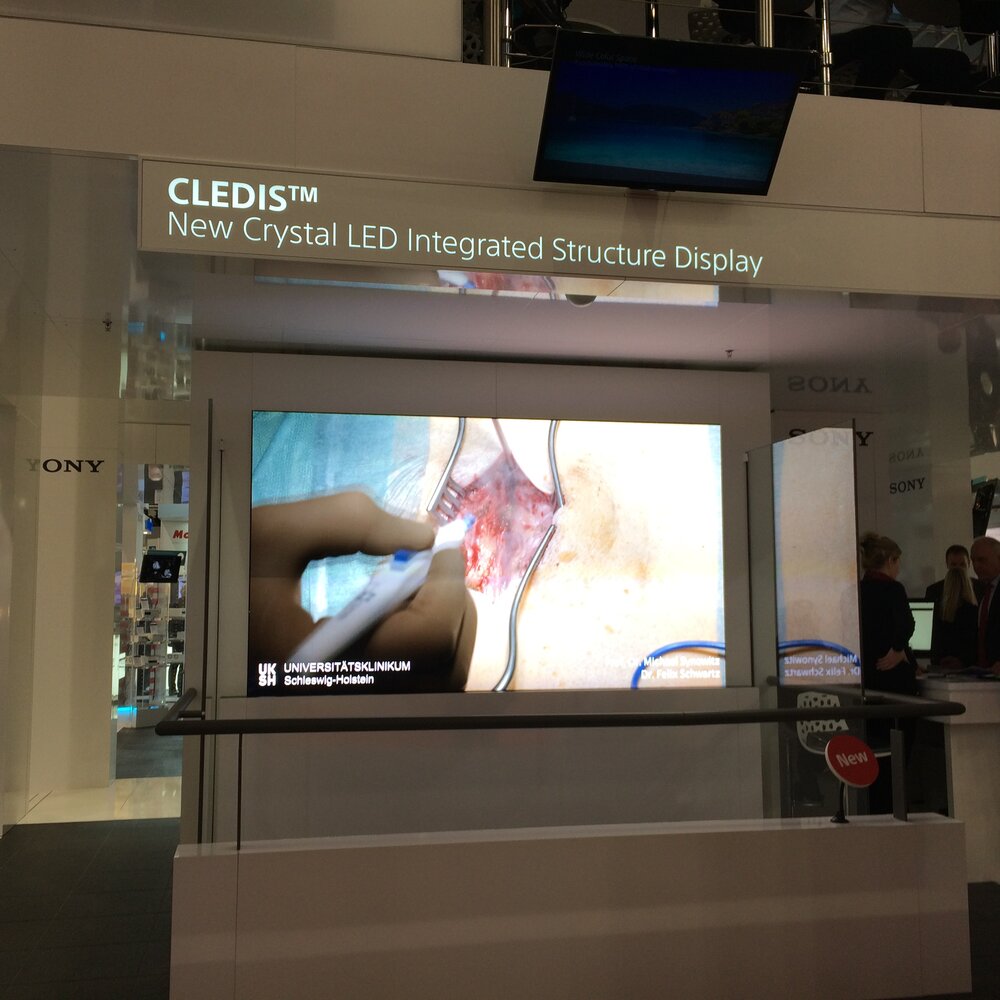 Monitor color quality (OLED, Quantum Dots, and now Crystal LEDs) is revolutionizing video. Sony presented its CLEDIS display (€70k per m2) with stunning contrast and a 180° field of view. But in the short term, the release of 4K television monitors for the general public will be what affects professional medical monitors. NDS Surgical Imaging (U.S.), Barco (Belgium), and Sony (Japan) exhibited their HDR (High Dynamic Range) screens, showing a range of colors beyond the SDR (Standard Dynamic Range) palette.

Integration in the operating room: A major subject

The operating room remains the core of hospitals. The search for efficiency (which has become critical for the development of outpatient surgery) and reducing the sizable number of errors make better integration in the operating room essential. Video plays a central role there. Widespread medical imaging (echography as well as radiography or scanners) within "hybrid" operating rooms make the subject more complex. The prospects of 4K and the switch to "all-IP" mode are changing the game on a technical level, forcing suppliers to remake the architecture of their integrated systems. Like Barco, Sony offered, for the second year, its proprietary, low-latency (6 ms) optical fiber-based "video over IP" solution. In any event, the subject is perceived as very important by industrial players in the field and critical by purchasers, who are unhappy with being boxed in by proprietary solutions. 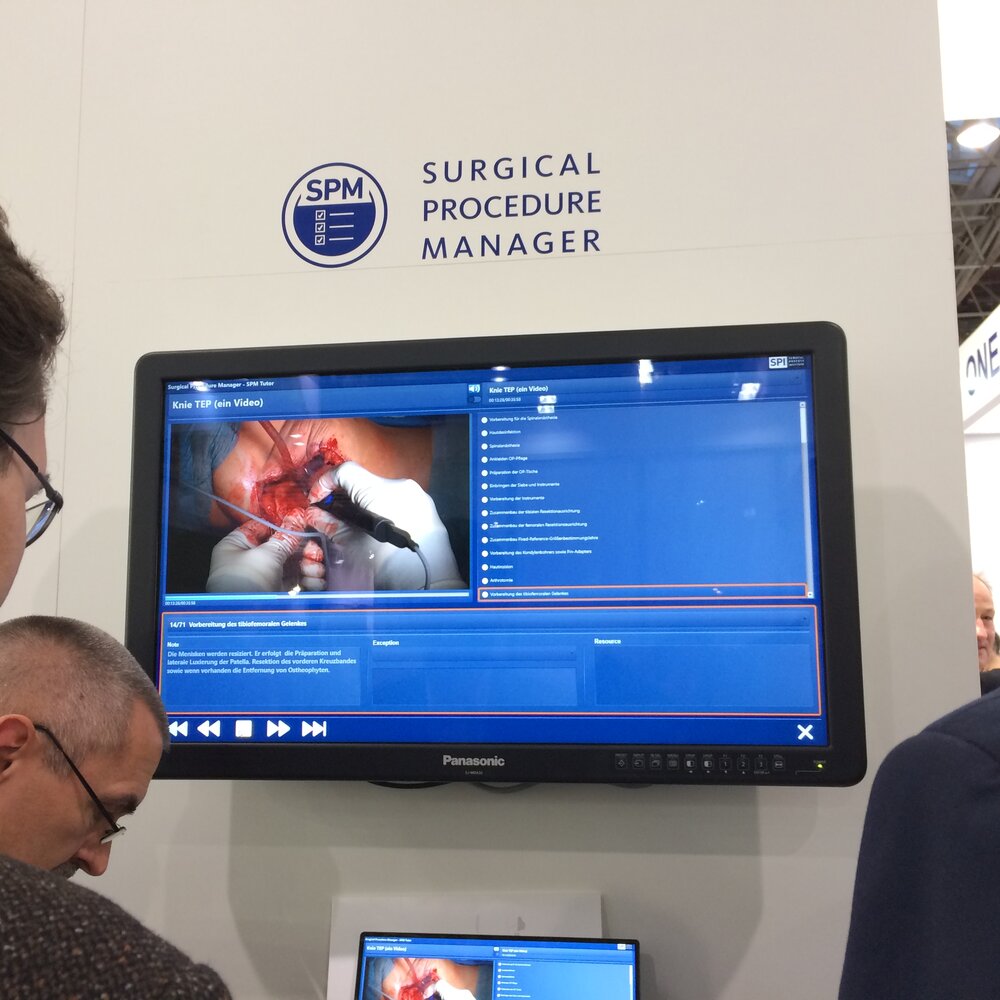 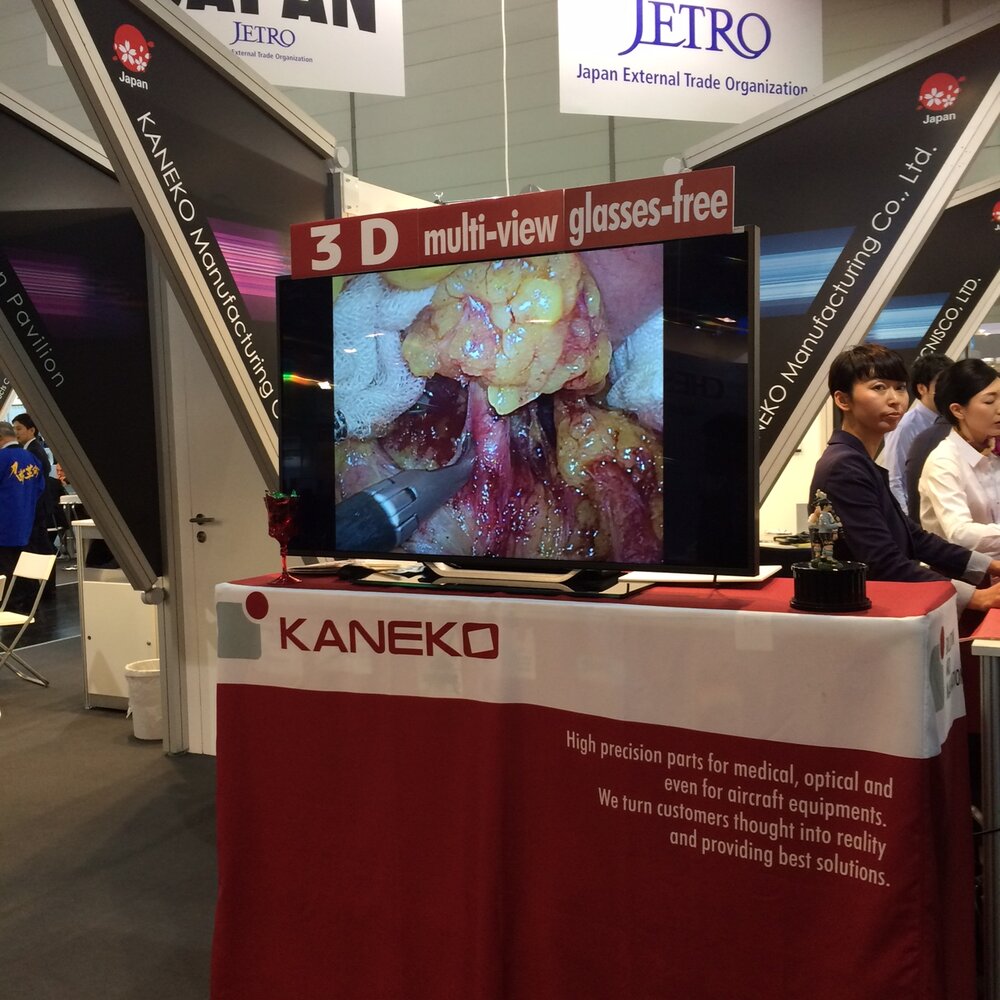 In the absence of scanners and MRIs whose suppliers opted instead to present at RSNA in Chicago two weeks after Medica, ultrasound scanners were at the forefront for medical imaging. Visitors could get exams at many stands, including pregnant women. Once again, Chinese suppliers were present, such as Sonoscape. However, the real trend is towards the widespread use of smartphones and tablets to control medical devices, which are getting smaller each year. Now that ultrasound scanners provided on a "tablet PC" connected to a probe have already been on display for several years, we are moving towards "connected objects" with Clarius, a Canadian company created by the founders of Ultrasonix, which exhibited "ultrasound probes" controlled wirelessly by a tablet or smartphone via wi-fi. The web has become the preferred medium for medical exchanges, including imaging exams. Besides images, apps have become a critical topic; there's even a medical app contest sponsored by Philips, which this year gave awards to Upright (rehabilitation assistant), Biopmedical (spine biopsy), and Tytocare (home clinical examination). 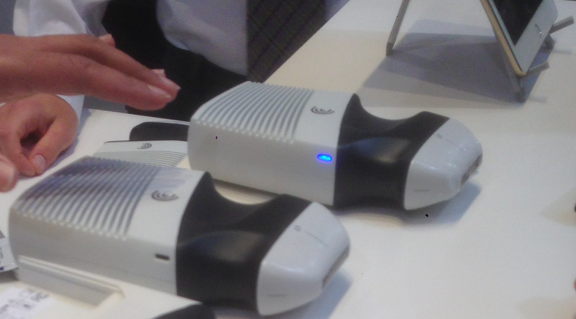 Widespread use of wi-fi

The fact that wi-fi has become commonplace both at home and in public places has brought down the final obstacles to its use in hospitals. Patient records are checked at bedside with moving carts. Some medical devices are also controlled using wi-fi. Until now, wireless communications had been limited to non-clinical usages such as surgeons' comments for students observing the surgery in a neighboring room. With latency-free transfers (baseband for HD on a 60GHz network with a speed of 3 Gbit/s), NDS Surgical Institute offers an HD monitor on a battery-powered moving cart, which no doubt will be a precursor to future augmented reality applications using a tablet or goggles.