Munich, the European core of Industry 4.0, hosted the 10th edition of the Augmented World Expo (AWE) in late October, as well as the 17th edition of the ISMAR international conference devoted to augmented and mixed reality technologies. Jérôme Royan, Principal Architect at b<>com was on site. He shares his impressions with us.

How is the Augmented Reality market behaving?

If you believe the figures, augmented reality represents a potential $100 billion market by 2022, which is attractive to investors! Three American players (Apple, Google, and Microsoft) are dominating the mass market, with the hope of democratizing augmented reality and entering the post-smartphone era. Furthermore, numerous SMEs are developing extremely quickly thanks to massive investments by major groups like Bosch, Siemens, Airbus, Schneider Electric, and Volkswagen. The augmented reality market in Europe is on its way to outstripping the American market, and should continue to grow. There are many newcomers, and although things are extremely encouraging for the deployment of AR in factories, this will unfortunately not encourage the interoperability of AR systems if standards are not put in place.

Where do we stand with the deployment of Augmented Reality?

Proofs of concept in industry 4.0 that rely on AR technologies have proliferated over the past five years. However, the move to deployment remains complex, and market solutions, which are often too general-purpose, are not suited to the specifics of industry 4.0. It should be noted that numerous SMEs are developing custom solutions by pragmatically iterating until they arrive at a solution that can be deployed at large scale. As evidence of this pragmatism, those black-and-white tags called ARCode or fiducial markets are making a comeback in order to more robustly initialize augmented reality services (Insider Navigation, Visionaries, etc.) What is the need? Is augmented reality meeting needs? Is it the most relevant solution? These questions popped up often in presentations on feedback from industrial firms. There are many tasks for which augmented reality provides a real benefit in terms of productivity gains, quality improvements, traceability, etc. But be warned, although many promotional videos promise miracles, augmented reality is not a cure-all solution for every client need. For now, deployments are primarily focused on uses related to training and quality control.

What are the next steps?

Deploying augmented reality solutions in plants requires creating interactive 3D content that will be viewed in the actual environment. We are now seeing the emergence of numerous solutions integrated or interfaced with PLM tools (Vuforia, Re’flekt, Diota, etc.) which make it easier to create this interactive AR content (maintenance, assembly, quality control, and other scenarios) without needing to write a single line of code. A demo of Vuforia in collaboration with Microsoft showed off an AR content creation prototype directly from HoloLenses. To do so, the expert wears the HoloLens and carries out a task while commenting on different steps of the procedure. The HoloLens analyze the expert’s voice, gestures, and environment and nearly automatically generate interactive content that can be played back on novice users’ HoloLenses. Augmented reality is well on its way to industrial scale, which is very good news! As for devices, numerous professional additions were presented at the show, like Trivisio goggles (custom-made for and used by numerous European armed forces), Vuzix (which won the Auggie “Best In Show” award, the top honor at the AWE), or Daqri’s glasses, whose tracking works increasingly well.

What booths made the biggest impression on you?

Fraunhofer showed off two prototypes, the first being a high-resolution VR headset that relied on a combination of lenses in order to combine multiple screens for each eye, the second being augmented reality glasses whose transparent screen incorporates a CMOS sensor for filming the user’s eye in real time to track their gaze. 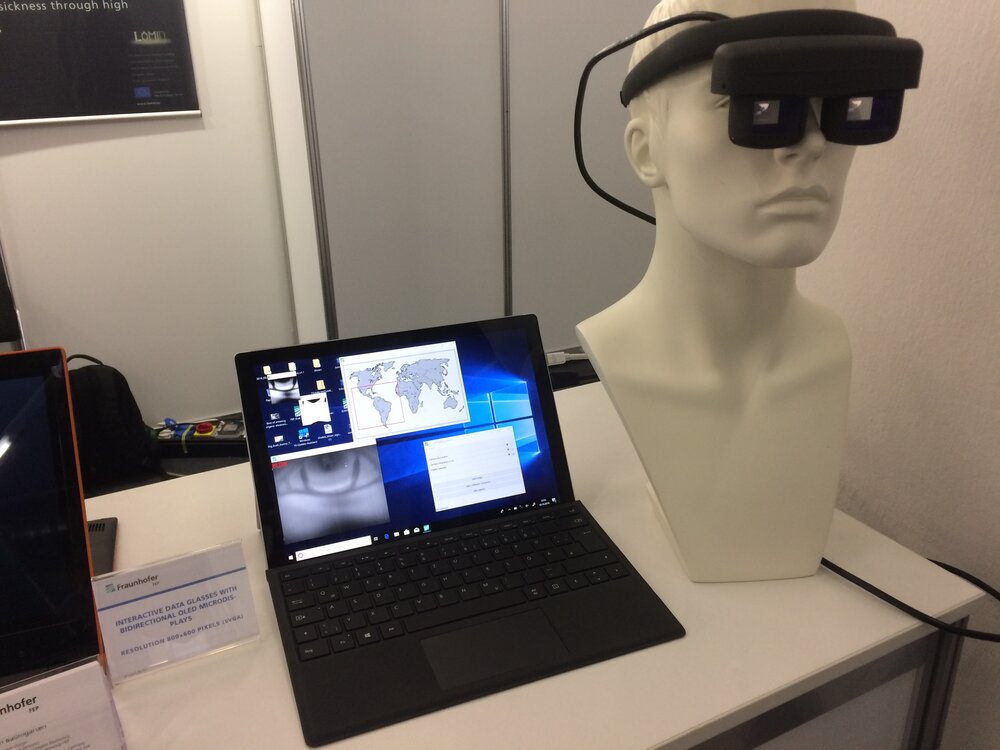 Even rarer, and no it's not an urban legend, after two years of waiting and multiple billions in investment, I was finally able to try out Magic Leap goggles off-line. Are they revolutionary, were they able to show me a whale 10 meters long shoot out from a basketball court, without any accommodation problems? The answer is obviously no. I was, however, able to view a 10cm-tall “angry bird” on the model at AWE. They are not disruptive, but putting aside the technological hype that has been brewing for more than 3 years and the disappointment that followed, they are relatively comfortable goggles, with a field of vision slightly greater than the HoloLens, with fast, accurate tracking, at least from a few minutes of testing.

Finally, Visualix, a Berlin start-up, presented its ARCloud technology enabling a multi-user, large-scale augmented reality experience. Only videos showed results on the outside, but this start-up is extremely promising, and I predict it will have a real future. 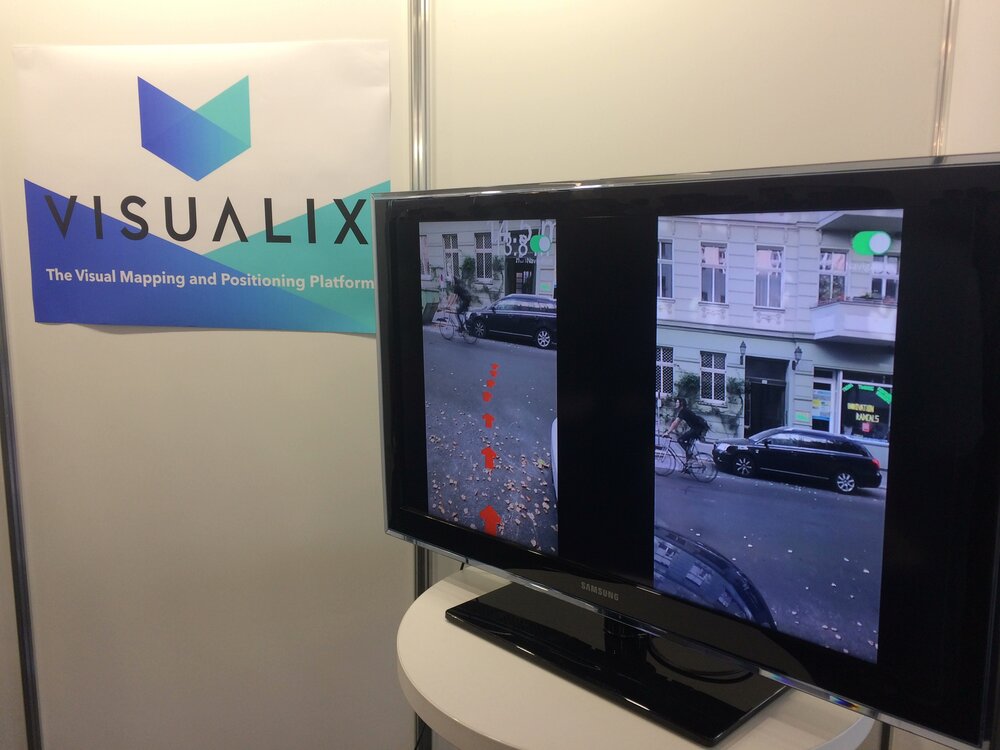 What are the new trends around Augmented Reality?

This year, the buzzword at the show was ARCloud. An augmented reality system like ARKit, ARCore, or HoloLens creates a map of the environment, a sort of point cloud that describes the geometry around you. This map is then used to focus and enable augmented reality systems to display and share augmentations perfectly matched with the real world. For now, these 3D maps of your environment generally are still stored on your terminal and cannot be shared with other users. But tomorrow, a general 3D map will be hosted in the cloud and updated by all the users of augmented reality systems who will become "google humans”, replacing “google cars”. Charlie Fink, a VR & AR specialist for Forbes who dedicated his latest book “Metaverse” at AWE, believes that the ARCloud, which will map the entire planet (indoors and outdoors) in 3D in real time will be worth more in the years ahead than Facebook's social graph or Google’s website indexing engine!

And where is b<>com in all this?

The "Augmented Reality Framework" industrial specification group initiated by b<>com in late 2017, which already has 18 members including Bosch, Siemens, Schneider Electric, Orange, Deutsche Telekom, Ericsson, and Fraunhofer HHI, met just before ISMAR at Siemens’ impressive campus in Munich. We took this opportunity to present the results of the questionnaire on augmented reality needs for Industry 4.0 conducted by b<>com and Clarté, which collected more than 70 responses from international players in the field. We also presented the baseline functional architecture of an augmented reality system initiated by b<>com and adopted by all members of the ISG. Last but not least, Nam-Duong Duong, Ph.D. student at b<>com, was able to present his research results on relocation techniques based on automatic learning methods at the ISMAR conference. 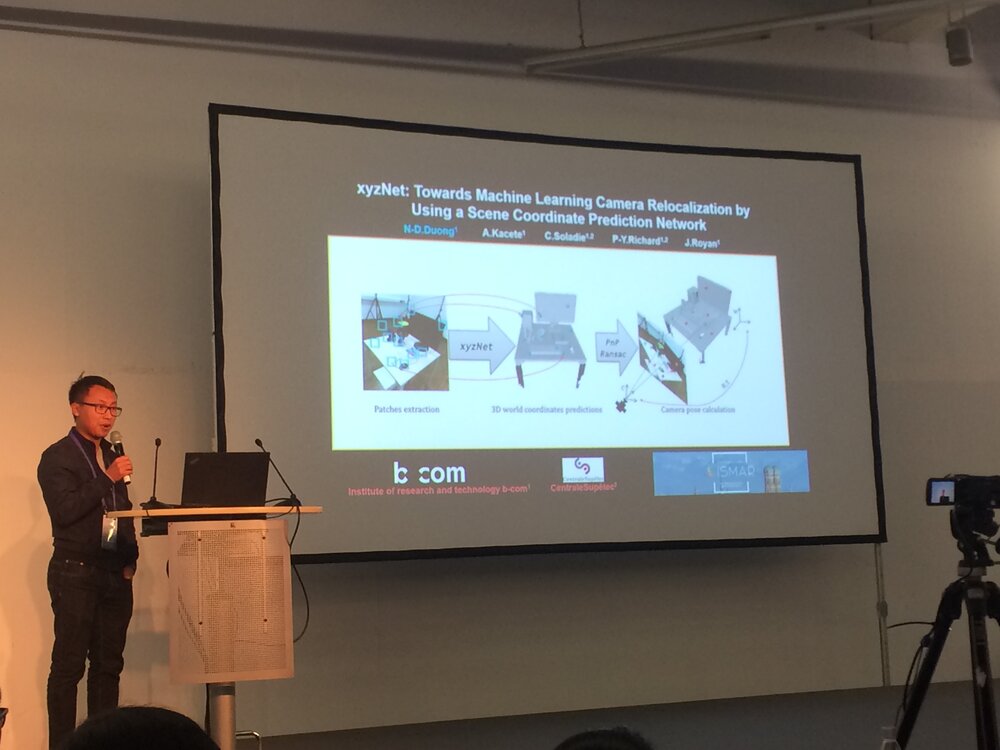