Share
contact an expert
Political speeches, product promotion, special effects: Holography is everywhere, but the term is rarely used correctly! It's been a key area of research for b<>com since its launch, so we asked Antonin Gilles, an expert in the subject, to give us some answers.

How would you define holography?

Holography is a process to record and then reproduce the light waves from an object or scene. This technique was invented by the Hungarian physicist Denis Gabor in 1948, and its first applications for 3D visualization came with the invention of lasers in the 1960s. Although holograms have traditionally been captured optically, the development of digital techniques now makes it possible to generate them on computers, which opens up new possibilities for applications. Note that holography should not be confused with other techniques, like Pepper’s ghost, which uses only a 2D projection on a semi-transparent surface!

What is the added value of holography?

We definitely feel that holography has potential because it promises the user an enjoyable, comfortable experience from start to end. A hologram uses diffraction to reproduce light waves that are emitted, transmitted, or reflected by a given scene, enabling the user to perceive it as though it were physically present right before them. Thus, unlike stereoscopic systems currently being used for 3D visualization (virtual reality, augmented reality, 3D movie glasses, etc.), holography offers all the depth cues of the human visual system, giving it the most natural and realistic possible illusion of three dimensions. It particularly helps to resolve the vergence-accommodation conflict found in stereoscopic systems, which sometimes causes headaches and nausea during prolonged use.

What are the industrial applications of holography?

In concrete terms, all applications that call for natural, realistic 3D visualization can take advantage of the benefits that holography can offer: Teleconferencing and telepresence systems, augmented medicine, virtual-reality video games, heads-up displays in aircraft or cars, and virtual assistants. In the longer term, holographic screens could replace traditional television screens.

Besides 3D visualization, holography is used in many other fields. We often forget about the holograms on each of our banknotes, credit cards, passports, and ID cards, which are there because they are so difficult to reproduce, and thus very difficult to forge! Other applications of holography include holographic memory for storing several terabytes of data on about the same area as a DVD, holographic interferometry for measuring static and dynamic displacements with an accuracy on the order of a hundred nanometers, and holographic tomography and microscopy for measuring the volume of an object under observation.

What are the obstacles to its development?

Holography uses light diffraction to create the illusion of depth. This imposes physical limits on the size of the hologram’s pixels, which must be about the wavelength of the light in order to enable this diffraction. To achieve a large-scale image, the number of pixels must therefore be far greater than the 8K resolution used in today’s most recent generation of monitors. For instance, a 10cm by 10cm hologram with a viewing angle of 120° requires more than 70 billion pixels, or 2000 times more than 8K. Fortunately, for holographic augmented or virtual reality headsets, we don't need that big a screen because they are close to the user’s eyes.

What challenges are being tackled at b<>com?

The first is Computer-Genrated Hologram synthesis, with the goal of achieving the most realistic possible 3D rendering in real time. We recently developed a holographic rendering engine for calculating full-HD resolution holograms with over 256 frames per second on a personal computer. We have also proposed several algorithms for accurately reproducing shaded areas and highlights in the scene.

The second area of research is the compression and transmission of holographic data. A 4K-resolution hologram includes several hundred megabytes per frame, which is very hard to transmit in real time with current communication systems. Nonetheless, each frame contains the light emitted by the scene in all possible directions, and much of that information is not perceived by the user. For this reason, we’ve offered several compression schemes to transmit only those light rays that are actually perceived by the user, which considerably reduces the quantity of data that needs to be sent.

All of these developments are currently built into a prototype holographic augmented reality headset. 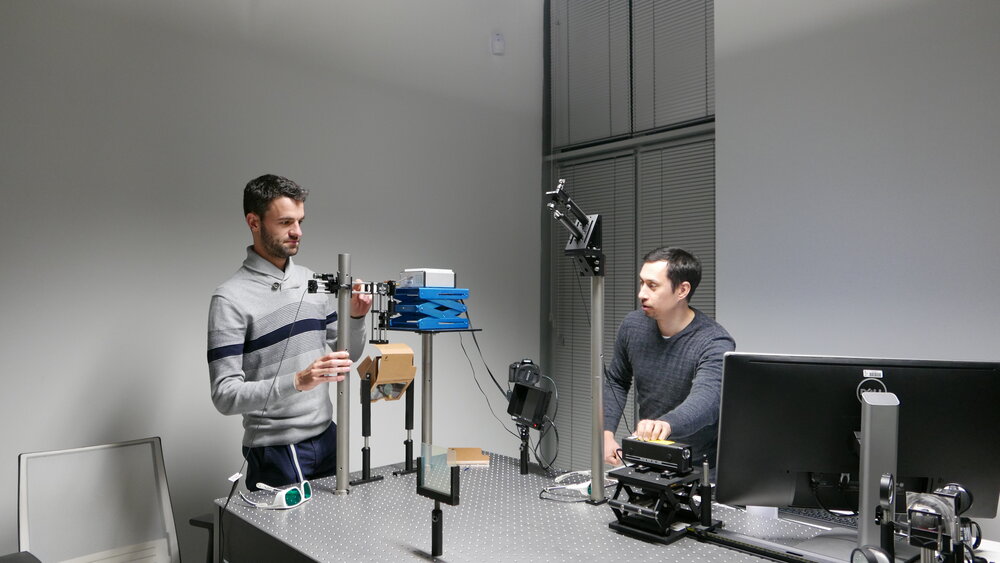 How have you been in touch with the international community on these issues?

For nearly seven years, we’ve had regular discussions with several public and private research laboratories that specialize in digital holography. These include NICT (National Institute of Information and Communications Technology) and Tsukuba University in Japan, ETRI (Electronics and Telecommunications Research Institute) and KETI (Korea Electronics Technology Institute) in Korea, Vrije Universiteit in Brussels, the University of Cagliari, and the Institut Supérieur d'Informatique in Tunis.

In the context of our work on hologram compression, we are also actively contributing to the JPEG Pleno standardization effort. We've also provided the community with a holographic database (hologram-repository.labs.b-com.com) for the evaluation of compression algorithms. Our work has also been published in multiple scientific papers.